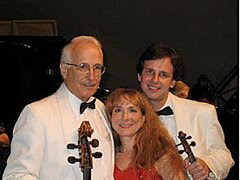 With age differences of more than 50 years, members of the Generations Trio bridge the gaps through a pure love of music.

The group, consisting of cellist John Sant'Ambrogio, pianist Judy Lynn Stillman and violinist DMitri Pogorelov, will perform "From Rameau to Ragtime" at 7:30 p.m. tonight at the School of Music Recital Hall in Glidden Hall.

"Their concert shows how music has evolved over about 200 years in a light and informal way," said W. Michael Parkinson, director of the School of Music. "This is not a concert where you will hear 'shhh;' the musicians are looking to reach out to the audience and expect interaction."

Stillman is artist-in-residence and professor of music at Rhode Island College in addition to serving as a piano and chamber music faculty at the New England Conservatory. She began playing piano at age 3, entered the Juilliard School at 10 and completed bachelor's, master's and doctoral degrees from Juilliard.

Sant'Ambrogio has enjoyed an illustrious career as a cellist in top orchestras and chamber music ensembles for more than five decades. He was appointed principal cello of the Saint Louis Symphony Orchestra in 1968 after being a member of the Boston Symphony Orchestra for nine years. In 1987, he founded and was the first artistic director of Strings in the Mountains.

Pogorelov is a prize-winning young virtuoso violinist and a seasoned performer. He is the youngest member of a well-known family of outstanding musicians in his native Russia. Pogorelov has won many international violin competitions before coming to the United States in 2001.

Admission is $5 for adults and $3 for seniors. Children and Ohio University students with a valid ID will be admitted free.
Posted by Ohio University College of Fine Arts at 9:57 AM

About Arts for OHIO